How "Paid leave" and "April fool" were born

Here are couple of interesting historical facts that I learned today.

Just have a look at the calendar for the month of September 1752. Google September 1752 calendar & see for yourself. You will notice, 11 days are simply missing from the month. 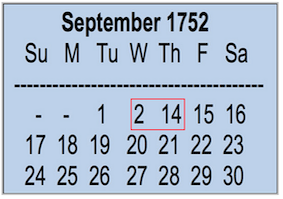 This was the month during which England shifted from the Roman Julian Calendar to the Gregorian Calendar. A Julian year was 11 days longer than a Gregorian year. So, the King of England decided and ordered 11 days to be wiped off the face of that particular month.

So, the workers worked for 11 days less that month, but got paid for the whole month :-)

Even after shifting to the Gregorian Calendar, many people refused to give up old traditions and continued celebrating 1st April as the New Year’s Day.

When simple orders didn’t work, the King finally issued a royal dictum; which stated that those who celebrated 1st April as the new year’s day would be labelled as fools.

From then on, 1st April became April Fool’s Day.